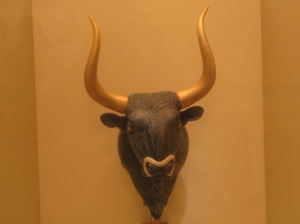 Bulls head Rhyton from Knossos displayed in the Heraklion Museum

Take a free look at the new extended version of ATLANTIS, SOLON PLATO FOR FROST and explore the contribution of those responsible for it’s arrival from the texts of the sacred egyptian temple scribes at Sais into the Greek classical world.
Solon and Plato both traveled to Egypt and around the ancient world in their quest for knowledge.
Sais attracted many Greek scholars and philosophers men such as Pythagoras of Samos were frequent visitors to the temple site of Neith and the city associated with Ra the Sun God.
To be released soon via Amazon Kindle in E-book and Amazon and Createspace in printed format.

1 thought on ““ATLANTIS,” SOLON AND PLATO FOR FROST? [NEW EDITION]”