Follow the long  journey from East to West of the Sun God Paiawon- Apollo.

From the ancient Sumerian and Mesopotamian worlds varied kingdoms the deity was adopted and known by different names by the peoples of the ancient world when the powerful leading cultures first exported their influence around the world.

In the Hurrian world the deity was a major figure with sacred sites established to the deity in Urkesh.

He was Aplu, a deity of life and death representing the power of the Sun deity over the world his followers lived within.

Establishing the archer deity and sun god in Syria the Hurrians would by their contact with the Hatti peoples export the deity into Anatolian lands, where the Sun deity became a powerful figure with his influence venerated by followers around the ancient worlds leading cultures.

In Ugarit the deity was the Archer and sun god Reshep and associated with the deity of the underworld and war Nergal.

Ugarit was an important trade hub port it was a gateway for the leading civilizations who would all be able to export and import goods via the high seas from East to West via the land and sea trade routes that Ugarit connected via its location on the Mediterranean coast.

Minoan fleets and other sea based powers operating in the Mediterranean seas in the bronze age world all called at Ugarit and Cyprus before travelling onwards along the Anatolian coastline.

From ancient Anatolia the Sun deity was exported to the Greek islands when settlers via the high seas landed on the varied islands such as Cyprus, Rhodes, Thera and the island of Crete.

The Minoan civilization embraced the Sun deity Paiawon the Master of Animals in the shape of the youthful consort and deity associated with the powerful Mistress of Animals deity in the Minoan world.

Sacred islands such as Delos and Letoai  modern day Paximadia off the Southern coastline of Crete attest the deities spreading influence over the ancient world from East to West.

From Minoan Crete the deity made the journey to the mainland and was established at Delphi where the ancient site was already sacred to the mother earth deity.Gaia.

Paiawon – Apollo the Cretan deity was adopted by the people at Delphi as the influence of new settlers beliefs from the Minoan world and culture of Crete fused with the mainland cultures resulting in Paiawon – Apollo being associated with the oracle site of Delphi already sacred to the mother earth deity Gaia.

Apollo retained the influence of the oracle site in the form of the sacred priestess of the site the Pythia whose sacred oracles were the result of her connection with the deity Apollo.

Who whilst in a trance like state induced by the vapours that rose from the fault lines that run directly beneath the sacred temple site of Apollo.

People came form around the ancient world to seek an audience with Apollo the deity of truth, light and justice.

His sacred oracles shaped the ancient world and history by guiding the elites and kings of city sates and lands. 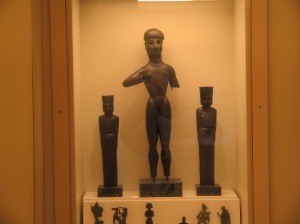